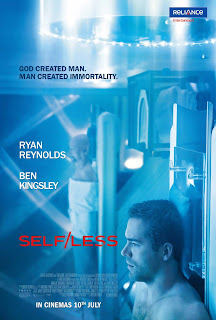 Mumbai, 21st June 2015: Reliance Entertainment will release film Self/Less on 10th July, 2015 in India. The film is a Hollywood science fiction thriller film which is directed by Indian filmmaker Tarsem Singh, of the films The Cell, The Fall, Immortals and Mirror Mirror previously and is written by David Pastor and Alex Pastor. The film stars Ryan Reynolds, Ben Kingsley and Matthew Goode.

The film is about an extremely wealthy man (Ben Kingsley), dying from cancer, who undergoes a radical medical procedure that transfers his consciousness into the body of a healthy young man (Ryan Reynolds). But all is not as it seems when he starts to uncover the mystery of the body's origin and the organization that will kill to protect its cause. In addition to Ben Kingsley, Ryan Reynolds and Matthew Goode, Selfless also features Victor Garber and Downton Abbey’s Lady Mary, Michelle Dockery.

Posted by Bhawana Somaaya at 18:32