May 21/ Tuesday:  It is dinner time and Sanjay, Yusuf sit beside each other with their plates of dal roti. In better days they have shared greater meals in finer places but life is all about adapting to changes and today 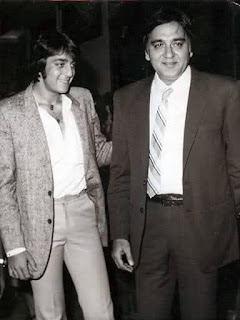 is one such day. Sanjay regrets not being allowed to meet Manyata and Priyanka the previous day and wonders when they will be allowed another visit again.

It happens the same night. Priyanka and Manyata arrive with a special permission and are allowed to spend 20 minutes with him and they are grateful. All three hold hands hands tightly and their eyes speak more than words. Tears roll down Priyanka and Manyata’s cheeks but it is more in strength than in sorrow. When it is time to leave, they hold hands again and smile.

Late at night Sanjay and Nulwala chat from the back gate of their cells but after a while both are exhausted and retire to their barracks.

Sanjay lies on his mattress in the dark room thinking about his father Sunil Dutt. He wonders where he found the courage to face so many adversities time and again. A familiar ache is coming back but Sanjay makes a conscious effort and brush aside all negative thoughts…!