Have you ever wondered why we whisper into Nandi’s ear when we visit Shiva temple? There’s an interesting story behind this tradition and it was unfolded in a recent episode of Devon Ka Dev Mahadev on television. 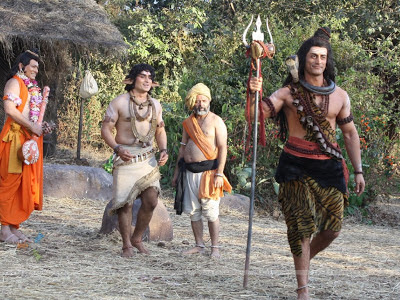 Goddess Parvati has lost her memory and has to endure the eight stages of awakening to regain her identity. The final stage of meditation is impossible without the guidance of Shiva and to help her he has to be in the same state as his consort. Before embarking into the samadhi Shiva informs his children and his faithful devotee, bullock Nandi to not disturb him.

Kartike and Ganesh promise to guard his privacy while Nandi pleads with Shiva to allow him participation in his meditation. Shiva agrees and as long as Shiva meditates in the snowfall of Kailash guiding Parvati step by step to salvation, Nandi squats opposite his Lord soaking in the spiritual process.

Taking advantage of the vulnerable situation Shiva’s other son, Jalandar abducts Parvati and hides her in his imaginary world. He orders Lord Yama and Goddess of Death to perish his half brother and a great warrior Kartike.

The only way to control Jalandar’s mayhem is to awaken Mahadev from his meditation but that is adharma. On Lord Bhramha and Vishnu’s advise Ganesh has to do this but intelligent Ganesh finds a way without being irrevential. He bends on his haunches and whispers into Nandi’s ear and since Nandi is connected to Mahadev in an unconscious state Ganesh is able to successfully transmit his message to his father without disturbing his dhyan.

When Ganesh communicates with Nandi, he is respectful to not come in the way of Nandi and his Lord, a tradition followed till today by devotees offering prayers to Shiva.