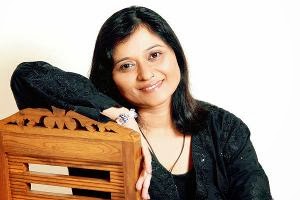 Director Mrunalinni Dayal Patil has started shooting for her forthcoming Marathi film Raakhandar, story of faith and belief in God. We can’t see him but the faith in him can bring him to us in different forms believes protagonist Sadanand Lokare. In a series of incidents in the film where the hero loses his job, returns to his village and cobbler father, marries and one day, senses the deity and begins his interaction. He is continuously tested for his faith in God by people. Will he pass the test? Produced under the banner of Surya Films the title song is sung by Sukhwinder Singh and shot at Jejuri temple near Pune. Director Mrunalinni Patil says her film is about Lord Khandoba and to have singers like Sukhwinder Singh and Shankar Mahadevan in her film is a blessing from the Lord. “I have submitted myself and the film to Khandoba, I have faith that he will look after me and the film”.