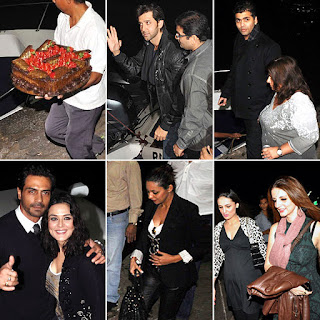 I was watching Hrithik Roshan’s birthday party pictures in the papers and thinking about the first time I met him. I had gone to interview his dad Rakesh Roshan at home and we were in the midst of an intense conversation when a strapping youth, his gym bag casually flung on his shoulder stopped by to talk to his dad. Rakesh stopped talking. ‘Meet my son Hrithik, very soon I’ll be launching him in my film.’

Hrithik stood at a distance, locked his green eyes into mine and nodded self assuredly. In the first impression he had all the making of a star. He was tall, well built, good looking and most important, had grown up watching all the legends in the family.

Before his debut he had assisted his father in a couple of films, carried Shah Rukh Khan’s costume and shoes, traveled by public transport to work  and stayed in ordinary hotels on outdoors with the rest of the technicians.

Came Kaho Na Pyaar Hai and a star was born. Came Koi Mil Gaya and Krrish and a superstar bloomed.  The bigger he turned the more human he remained. He was by the admission of the family the perfect son and the perfect husband and father. His filmmakers relied on his commitment and admired his devotion to his work.

In his interviews or in his public appearances one never found Hrithik blowing his own trumpets. Infact he was always careful never to reveal more about him than necessary to the media. Actors often talk about how a certain character they played transformed their lives but when the film is over, the character is forgotten.

I was not surprised however when I read about Hrithik championing for the cause of paraplegia. When he worked in Guzaarish he endured the pain of his character and remains sensitized to the suffering of spinal injury patients forever.

Two things touch me deeply about Hrithik and both I discovered accidently. The first, he collects memoirs of all his special characters – so there is a net T shirt from Kaho Na Pyaar Hai, spectacles from Koi Mil Gaya, mask from Krrish, etc, etc and the second, even more special than the first is that every year Hrithik makes it a point to mend a broken relationship on his birthday.
Now you understand why I say he is special!