It is launch of my debut book on Amitabh - The Legend at Cross Word in Tardeo. Books on film personalities are not as common in India and therefore a novelty. This is the phase when electronic media has sprung into prominence and the still photographers are suddenly feeling displaced. 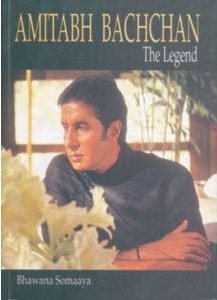 All roads lead to Crossword on October 10 and Bachchan much against his wishes gets held up in traffic.
Fortunately, this is also the time of the newly launched mobile phones and he requests me to apologise to the guests.
The media has heard that Bachchan then in his sabbatical is sporting a French beard and curious to capture him in their cameras.

Bachchan arrives in the famous Manmohan Desai gifted Bus and creates a stampede at the entrance.

The event is attended by all his prominent filmmakers Yash Chopra, Ramesh Sippy, Prakash Mehra and some of his leading ladies featured in the book.

This is the first time Bachchan speaks about his ban on the media and Shobhaa De, then editor Stardust present at the launch confirms his side of the story.

Posted by Bhawana Somaaya at 18:07