Mahadev’s older son Kartike is a tormented soul and there is a reason for it.  He has killed the fondest devotee of his father and he will be anguished till he makes penance. Lord Vasudev explains to Kartike that the oly way to conquer his karma is to create Shivling and lay the foundation of a new shrine with his own hands.

Ganesha has made a promise to his mother Parvati that he will not return to Kailash without his brother so accompanies Kartike on his mission.The brothers walk miles and finally find  an appropriate rock that Kartike transforms it into a perfect Shivling. 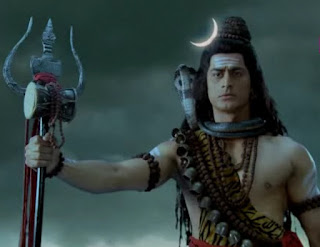 Ganesha is happy because they can return home but their father Mahadev will not make it easy for his children. Mahadev says that he will test everybody who woorships him and his son Kartike is no exception. He  encounters Kartike in the disguise of an ageing man eager to possess a Shivling for his Lord and distressed that he is  incapable of accomplishing this.

Kartike feels sad for him and offers him his Shivling so he can pay to his lord.

Ganesha is supportive of his brother’s noble decision and keeps up his spirit as  they go searching for another rock. They are challanged by the emperror of a mountain who will not allow Kartike to touch a stone  unless he proves himself a warrior. Kartike declines him for violence is not his goal. The emperror offers another option. Kartike must answer his questions and if he fails he will be cursed to transform into a stone himself. Kartike agrees.

Mahadev in the avtaar of emperror asks: Who is your best companion in journey of life?
Kartike: Patience. If I’m patient I’m able to endure everything.
Mahadev: What is that color that cannot be robbed but can be lost?
Kartike: Knowledge, nobody can rob my wisdom but if I’m not careful arrogance can cloud it.
Mahadev : What is that you sacrifice and feel peaceful? Kartike: Pride, dropping it makes me lighter.
Mahadev : What is in your possesion that you lose and rejoice?
Kartike: Anger is a destructive emotion and we are better without it.
Mahadev: What defines you as a superior existence – genes or genius?
Kartike: Compassion because without empathy all is futile.
Mahadev: Final question, of all the virtues which is the most superior?
Kartike: For me it is my bonding with my family.

The emperror is impressed and invites Kartike to borrow a rock from his mountain but Kartike’s struggle is far from over.