I was recommended to Devon ke Dev Mahadev by a friend and ever since I have been hooked on to the serial. Where ever I am I rush back home to watch the 8pm show on Life OK and in case I miss it I make sure to not sleep before I have caught the repeat. 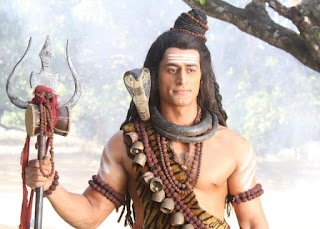 Shot on just one or two locations the show is engaging for its rich content and the most perfectly cast lead pair as Shiv and Parvati.

These days the show tells the story of Mahadev’s biggest devotee Parshuram.

It seems one day, before Mahadev went in for his meditation he requested his two sons Kartike and Ganesh to guard his gate so nobody disturbed him. They did and when Parshuram walked in unannounced Ganesh very politely turned him down.

Parshuram was offended at being declined a meeting with his master and provoked by Ganesh’s unflinching stand to let him trespass, Parshuram is provoked and attacks Ganesha with his precious weapon which breaks Ganesh’s tusk.

Ganesh does not strike back because he wants peace till his father completes his meditation.

When Mahadev rises from his meditation Parvati is livid and urges her consort to punish Parshuram for his attack on their son. Ganesh pacifies his mother that he could protect himself but didn’t because defying Parshuram’s weapon blessed by Mahadev would be defying his own father and he wouldn’t wish to do that.

Parshuram is spellbound by little Ganesh’s patience and wisdom. He is full of remorse  and wants to make amends. So he picks the broken tusk fallen on the floor of Kailash and grants a boon to Ganesh. “ What is done cannot be undone but this broken tusk in time to come will write the most precious and musical epic in reverence of deities.”

Parvati now understood why Mahadev refused to punish Parshuram. If there was no conflict, no opposition and no regret there would be no opportunity for the universe to discover  the multifaceted Ganesh.

Posted by Bhawana Somaaya at 18:35