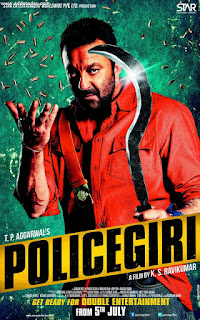 It is 1pm at PVR Theatre Juhu where the media is invited for an introduction with the cast of 'Policegiri'. As   we enter the auditorium we are presented a police cap as a memento. Soon Dutt’s family comprising sister Priya Dutt and brother-in-law Kumar Gaurav arrive and take seat in the first row. Producer T.P.Agarwal talks about the making of the film. He says “Sanjay loved the original Sammy and asked me to purchase the rights for making the film in Hindi. When I did he was as excited as a child to start shooting immediately and it was his passion that made him complete in a record time. Now all I pray is that he is proud of the final product and comes back soon, so that we can work on another film again.” The director, the choreographer and Sanjay’s co-star Prachi Desai are all very emotional about Sanjay and feel that their collective prayers will bring him back early to them. So are Kumar Gaurav and Priya Dutt. They wish the team super success for the film and leave the auditorium quietly.