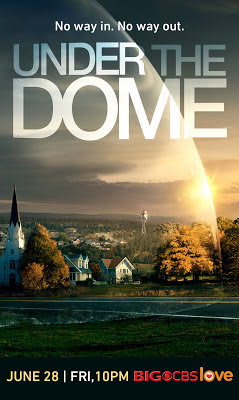 BIG CBS LOVE is all set to participate in a global television event with the launch of a brand-new show, Under the Dome. The 13-episode series, based on author Stephen King’s best-selling novel of the same name, will launch simultaneously in several countries within the week and features some of the biggest names in entertainment like Mike Vogel, Rachelle Lefevre, Colin Ford and Brit Robertson. Produced by CBS Television

It tells the story of a small town that is suddenly and unexplainably sealed off from the rest of the world as an enormous transparent dome descends on it. The town’s inhabitants face issues like surviving in the postapocalyptic condition in the town like how the dome got there and how long it would take to disappear. The show brings together four of the biggest names in international entertainment - executive producers Neal Baer and Brian K Vaughan who have previously worked on shows like  Lost, ER and  Law  and Order: SVU, and director of the pilot episode Niels Arden Oplev who has also directed the original Swedish adaptation of the critically acclaimed movie Girl With the Dragon Tattoo.

In India, Under the Dome will be promoted extensively using on-ground activations, digital innovations, print media and OOH bringing into play the media muscle of Reliance Broadcast Network and external media.

As BIG CBS LOVE gears for phase II of digitization, with Reliance Broadcast Network’s recently launched consumer awareness campaign ‘Choose Your Set Top Box Wisely’ campaigned across 4 metros and extended to 38 cities in DAS phase II. The campaign has been designed to empower consumers with information on digitization and will be promoted across the platforms of television, radio, cinemas, digital, outdoor, on ground and road shows.