When I saw Drishyam I was not sure if the film would be liked by the audience. I didn’t because it posed a moral conflict for me but box-office proves that the audience does not care for morality any longer!

The film has completed 50 days and is still going strong. Not that director Nishikant Kamat’s Hindi remake of the film is a patch on the Malayalam film but even then the story has struck a chord with cinema lovers. 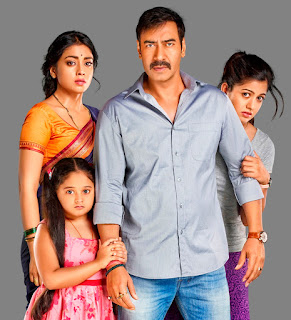 Perhaps Drishyam is about our changing morals and inadvertently our changing society. Perhaps this is what cult movies are about; stories that make you think and alter perspectives.

In times of crisis that engages a family what would a common man do?

What would you do?

Would you do what Ajay Devgan did? Is he right?

Is Tabu wrong for handling the case the way she did? Both are parents and both are suffering for their loved one.

It is no minor achievement that Drishyam is listed as the fourth Highest Rated Feature Films Released in the year 2015 with as many as 12,515 votes on IMDB. For some reason Drishyam has been trending on the social media too.

Yet again actor Ajay Devgan proves that he understands the pulse of the audience and has made the right decision.