Te3n is celebration of performances - DAY 840 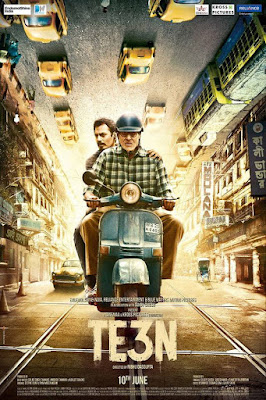 Te3n is the story of what happens to the family of a child kidnapped in broad day light, a story of love and loss, of pain and pathos. What is interesting is that his is not a regular who dunnit thriller infact I would describe Te3n more as a story of concern than suspense. Director Ribhu Dasgupta and writer Suresh Nair do away with stereotypes in both the narrative and the characters so Amitabh Bachchan’s John Biswas though ageing is far from a victim. John uncle as he is called can fix his home ceiling fan, revive his rickety scooter, shop vegetables, pay electricity bills and even cook new recipees for his wheel chair bound wife.

Nawazuddin Siddiqui’s police inspector Martin and later Father Martin are characters with conscience. We have seen many cops and many priests on Hini screen but this is as real as it gets. As Sarita Sarkar you connect with Vidya Balan from the first scene she is introduced in a compassionate moment at the police station. Vidya proves that she does not have to be brutal to be taken seriously as a cop.

Inspired from Korean film Montage Te3n unravels many secrets as the story travels the busy streets of Kolkatta in train, tram and road. The charcters keep you engaged all through and the climax is unpredictible. The subject could so easily have become violent and abusive on the contrary Te3n encompasses all generations, is sensitive, rivetting and refreshing. The pace is a bit slow and that’s probably the only negative 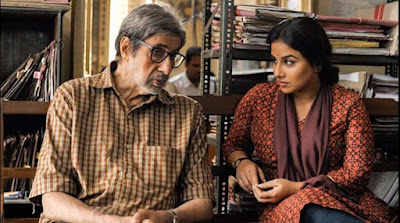 and combined with music it adds drama to the moment.

Watch Te3n for the message – it is not about revenge, it is about justice and the superlative performances. Nawaz shines, Vidya sparkles and Bachchan breaks your heart! It is amazing how the angry young actor of the 70s continues to redefine his characters and cinema over the last four decades.

Posted by Bhawana Somaaya at 20:44