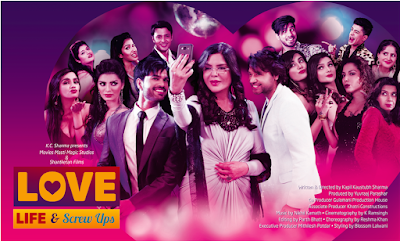 launched with much fanfare in New York at My True Colors Festival. It marks the digital debut of all time diva Zeenat Aman. She will be again seen in a super glamorous avatar of Joanna, a non-apologetic vain, happy go lucky owner of a café. A story of bunch of friends and their love life, the series is written and directed by Kapil Kaustubh Sharma. Sharma a self proclaimed fan of Aman chased the actor for two long months before he got an appointment with the yesteryear star. He admits that she was unsure about going digital but was hooked when she heard the concept, even remarking that “this could have been a movie!” Zeenat has chosen the ‘70s look for the character complete with long skirts and goggles.

For the role Zeenat went on a strict diet and did a rigorous work out to look the part of Joanna.  LL&SU is first Indian series to star popular names from TV, theatre, modellingand cinema.