Arnab Goswami of Times Now is on The News Hour night after night and debate after debate cracking the whip on politicians, judiciary, defense, police, security, society, infact anybody in the midst of a controversy!! 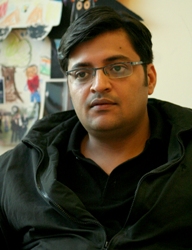 Recently during the Gujarat Assembly Elections he was on air talking to panelists from both the parties literally from dawn to dusk, quoting past, present year figures, elaborating strategies and offering insights into candidates, parties and public opinion and BJP candidate Ravi Shankar Prasad and Abhishek complimented for that on TV.
The regulars on the show are used to Arnab’s aggressive stand on issues and his characteristic style of silencing protestors by raising direct, hard hitting questions.
As a loyal viewer of the show I have a few questions to ask about the anchor on this blog :
1. How does Arnab Goswami and anchors like him preserve their voice?  Do they gargle with salt water or swallows honey with hot milk?
2. Where do they derive their indefatigable energy from? Does Arnab for instance drink Complan or does he take Revital like Salman Khan?
3. How many Blue-Black or Blue Grey suits and different colored ties does he possess?
4. He is taking on the mighty and the powerful night after night and month after month for a long time now. Has there been a threat to his life? Does he have personal security and if not, should he?
One last point, many panelists complain that Arnab Goswami shouts his points on the show. If that is true why do they agree to appear on the show? Is it out of fear or the desire to watch them on air?