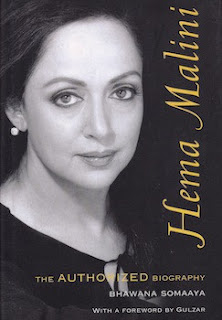 Story So Far was an initiative by India Express Group to document Hindi cinema from the origin to the year of publication 2003. Books like these are made special by the rare pictures. My fifth book Cinema Images & Issues (2004) are a collection of film essays - some explored as academic study, while some retained as stubborn memories that refuse to fade. The concerns for the issues, I admit, came in much later after I had sufficient exposure and the confidence to disagree and debate on what I watched on screen and read on the subject.

I had no idea that attending a dance ballet by Hema Malini as Draupadi and commenting on it in my editorial would result in my sixth book Hema Malini - Authorised Biography (2006). This was my second biography after Amitabh Bachchan co-incidentally both superstars of the 70s and the 80s. Initially Hema Malini wanted a book only on her as a dancer but I insisted on including the woman and the actor because I knew the publisher would not be happy printing her affair with dance and Hema understood and accepted my decision. The pressures and the process of journeying her life and getting to understand her as a person is an experience I will always cherish.

Posted by Bhawana Somaaya at 16:04