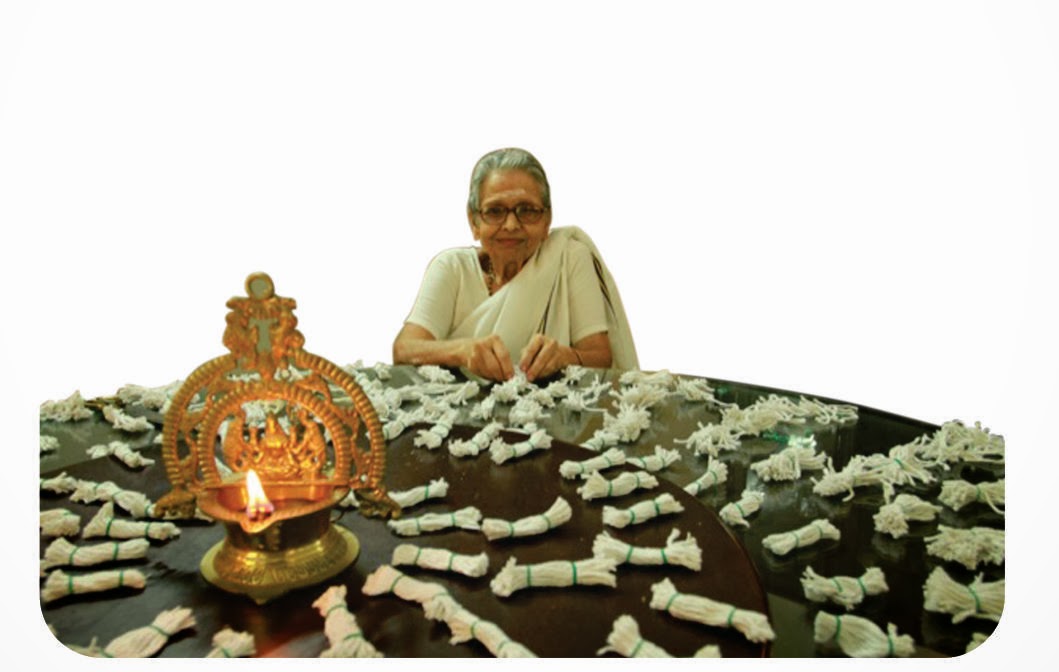 Every time Lakshmi Menon saw her 89-year-old grandmother create wicks for the family to light their daily lamp to Gods in the puja room and sometimes for neighbors and friends Lakshmi wondered how she could weave the cotton in a single string so effortlessly. Lakshmi was enchanted and felt that the tradition should be preserved in more way than one. She used her resources and sold the idea to old-age homes. They loved it and before Lakshmi knew and Grandma Wicks or Ammoommathiri as it is popularly called in Malyalam became a brand. Ammoommathiri is fast gaining popularity in not just Kerala, but across the shores in the Gulf as well. On my recent trip to Kerala for International Film Festival I heard that a documentary film on the subject is under production with a voice over from Malyalam superstar Mohan Lal.

In the same magazine I read that there is no such thing as multitasking as you can do several complex tasks in rapid succession, sequentially, but it is impossible to do them simultaneously. Interesting isn’t it? I learnt about the Beauty in Brokenness (beautiful title) which actually is about learning to let go of the idea that life should be perfect. Writer Wayne Allen elaborates on a Japanese term Wabi sabi that is almost impossible to translate. Wabi sabi apparently captures the essence of Zen living where Leonard Koren, author of Wbi-Sabi describes it as the beauty of things imperfect, impermanent, and incomplete, the antithesis of our classical western notion of beauty as something perfect, enduring, enduring, and monumental. Beautiful isn’t it? I’m deeply moved by the concept.

Posted by Bhawana Somaaya at 14:45