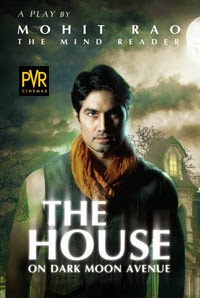 What is about the spiritual world that draws us so strongly to them and is that the reason PVR Cinemas have ventured into an alternate content with their forthcoming project The House on Dark Moon Avenue, an interactive play, the first of its kind in India.

During the Victorian era those suspected of possessing psychic powers were feared and isolated from society. On the Dark Moon Avenue, just outside of London, is a haunted home apparently a secret meeting place of similar powerful spirits and even though the building has since been broken down and the avenue renamed to dissolve superstition, the mystery continues and the play reveals these secret experiments.

This interactive Play, performed by Mind Reader Mohit Rao is a journey into the fascinating lives of the psychics and their experiences with varied experiments. Set in 1870, this psychological thriller will involve live participation from members of the audience. Hosted by PVR Cinemas, this Play combines all the frills of a movie experience, with all the thrills of a Live Show.

In short, it sounds different!