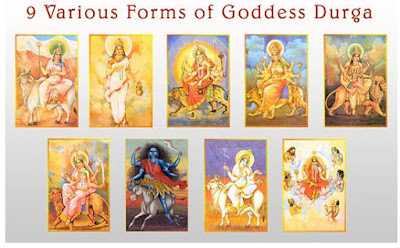 Legend has it that Lord Shiva granted permission to his wife Goddess Durga for visiting her mother for nine days and therefore had to accomplish her task in that time and demolished asura Mahisasur which is why devotees fast on all the nine days remembering all her nine avtaars that is Sailaputri, Brahmacharini, Chandraghanta, Kushmanda, Skanda Mata, Katyayani, Kalaratri, Maha Gowri and Siddhidayini.  Long before the festival actual begins, the devotees start preparing various cuisines and purchase new clothes for the auspicious festival. It is also about savoring delicacies, dancing all nine nights.
Chaitra Navratri symbolizes the beginning of the Hindu New Year which marks the beginning of the spring season. The three most significant manifestations of Goddess Shakti are Goddess Durga, deity of power, Goddess Saraswati, deity of knowledge and Goddess Lakshmi, deity of fortune.

Posted by Bhawana Somaaya at 09:56