Akshay Kumar was in Delhi to promote his upcoming film Singh Is Bliing.

At a fashion show woven around the theme of SIB Akshay thought it appropriate to request the rich and the famous to support him in raising funds for grieve stricken farmer families.

In a record 15 minutes the actor collected large funds and when Chief Minister of Delhi Mr Arvind Kejriwal learnt about this, invited Akshay and team to his office. 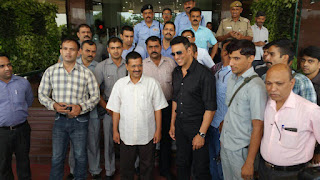 The producer of the film Grazing Goats was confident that the film would do amazing business but the collections have overwhelmed everybody.

Now we know why Akshay feels like a king when he wears a turban, he proves that Singh is surely the King.