Smita Patil exemplifies what it means to be at the right place,at the right time and with the right people. This book is not a conventional biography but traces her meteoric journey through those seminal years when parallel cinema reached its heights as many auteur redefined both the film narrative and emergence of the new Indian woman. 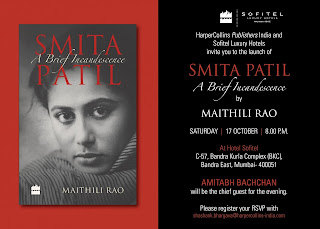 The Introduction sets Smita in the context of the rise of this new cinema and the next   two chapters describe her staunchly progressive middle-class Maharashtrian roots in Pune and her subsequent move to Bombay. From newsreader on Doordarshn to working with the foremost directors of the day is the fascinating story told in chapter 3.

Smita’s extraordinary contribution to the making of landmark films is the heart of chapter 4, titled Her Dasavatars.

Chapter 5 details another remarkable feature of her career: a non-egoistic, whole- hearted participation in ensemble films that featured the who’s who of parallel cinema.

The 80s are ambivalent, where she straddled both the best of new cinema and ventured into mainstream masala and this uneasy ride is critically examined in chapter 6.

The next chapter attempts to capture the elusive contradictions of the complex woman behind the screen image.

The final chapter mourns Smita’s tragic death and celebrates what she meant to a host of people, both those who knew her well and others who loved her from afar, mesmerized by her screen presence.  The insights and reminiscences of her family, friends, directors, co-stars and journalists are woven into the narrative.