Last week I was invited to the premier of Walt Disney’s maiden venture Beauty & the Beast in India and I have to admit it was a spectacular show so what if it began 45 minutes late. Once you were seated and the show began you were transported in a magical world. 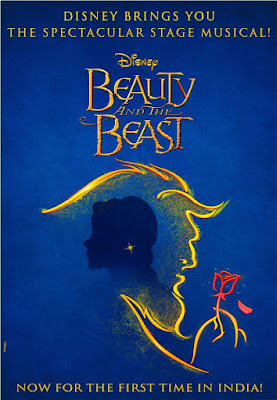 I was fortunate to be seated one row ahead of Vidya Balan and Siddharth Roy Kapoor of UTV and could sense Vidya Balan’s excitement. All through the show an anxious Vidya sat clutching husband Siddharth’s arm and everytime it was time for applause Vidya bloomed like a proud wife.

Based on the Academy award winning animated feature film Beauty & the Beast released in 1991, this classic musical love story is presented to Indian audiences on the same scale as the mega – productions seen on New York’s Broadway and on London’s west end.

The India musical production has been developed and directed by Vikranth Pawar and featuring over 100 of the best musical theatre performers from all over India. It is said over 8000 entries were scanned for auditions which lasted over four months.

While many would have liked it to be a Hindi musical this one is in English at 130 minutes in duration, with select shows across Mumbai and Delhi from October to December 2015. The show is a result of super team work and spectacular talent be it the vision of Vikranth Pawar ( show director and creative head, live entertainment at Disney India), Lesle Lewis (music direction), Terence Lewis (choreography), Varsha Jain (set design), Gavin Miguel ( Costume Design), Pallavi Devika (hair & make – up) and Suzanne D’mello (vocal training).

Don’t miss the show if you can afford the tickets. If not beg, borrow, plead but watch the show. You will be proud of India and Vidya Balan has the right to be proud of her husband to bring this to India.