Richa Chadha gave a heartfelt performance in Masaan and became the talk of the town. 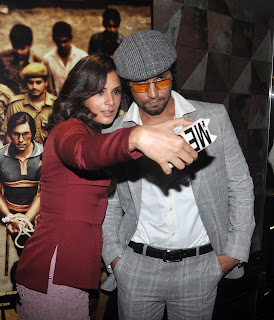 Now the two come together for a much talked about film called Main aur Charles.

The two have been busy with the promotions of the film for some time and at a recent event shocked the media when they agreed to kiss for the cameras.

This happened during the trailer launch of Mani aur Charles, and naturally the media was excited.
Unlike the olden days when the lead pair of a film did just aankhon aankhon mein ishara,

the new generation like Deepika Padukone and Ranveer Singh indulge in open flirtation and Randeep Richa go a step further and are ready to kiss and tell in front of the shutter bags.

If the passionate kiss in public is anything to go by, we are ready for a sexy film coming to the theatres. What say Charles?

Posted by Bhawana Somaaya at 09:27