Today is the first day of Navratri and singer Parthiv Gohil who is known to juggle many roles like composer and conceptualizer has come up with a dream project close to his heart.

Filmmaker Sanjay Leela Bhansali has been an admirer of his voice for years and used Gohil the alaap in Hum Dil De Chuke Sanam the story of a guru/ Vikram Gokhale who asks for a volatile guru dakshina from his protégée Salman Khan. 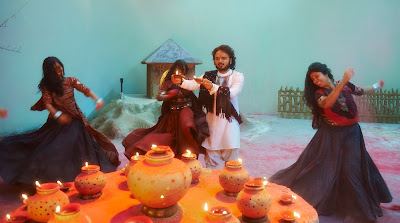 Over the years Parthiv has proved his versatility and this includes his latest album a dream project Garabo, a hymn dedicated to Maa Shakti. For a long time Parthiv had been thinking of reviving the trend of Garbo and explaining the true significance of the festival which he has via his music video already a super hit on the YouTubehttps://www.youtube.com/watch?v=I5U_y-lvvas

Gohil reveals that when we decided on the video he was certain to keep it as authentic as possible. We researched how Garabo was sung and performed over the decades and made our set and costumes accordingly.  Many big names from the music industry are associated with the album.

Music arranged by Sumeet Mascarenhas and Aditya Dev and programmed by Akshay - Aakash Gohil has dedicated Garabo to his mother, as “She faced all the the adversities of life and made me an artiste, my tribute is to her and all the mothers”.

Posted by Bhawana Somaaya at 09:54